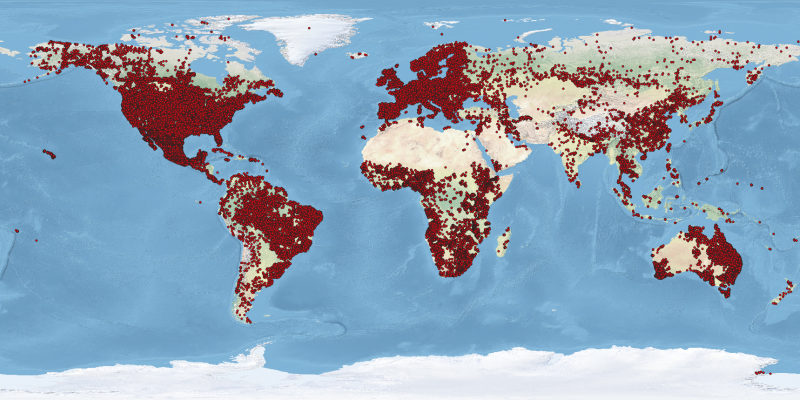 The data team at ISRIC – World Soil Information has just released a new version of standardised soil profile data for the world. These were derived from WoSIS (World Soil Information Service), ISRIC’s central database. The present version contains quality-assessed and standardised data for some 196 thousand soil profiles, representing over 832 thousand soil layers (or horizons), and over 6 million records. The profiles come from 173 countries.

Over the last eight months, we have undertaken a major effort to assess all new datasets made available to us for inclusion in the ISRIC Data Repository. For the WoSIS standardisation workflow itself, we only considered those new data sets (46) that have a ‘non-restrictive’ Creative Commons (CC) licence, as well as the defined complement of attributes. ‘Non-restrictive’ has been defined here as at least a CC-BY (Attribution) or CC-BY-NC (Attribution Non-Commercial) licence. Presently, this corresponds with data for some 196 thousand profiles (i.e. profiles that have the right licence and data for at least one of the standard soil properties).

The quality-assessed and standardised data are provided freely to the international community via a web feature service (WFS); the WFS-set is dynamic and known as ‘WoSIS-latest’. For consistent citation purposes, we also provide static snapshots of the dynamic set with a DOI. The most recent version, ‘WoSIS Snapshot – September 2019’, is available from the ISRIC Soil Data Hub via https://dx.doi.org/10.17027/isric-wdcsoils.20190901. The workflow and database content themselves are described in a data paper (submitted): Batjes N.H., Ribeiro E., and van Oostrum A.J.M., 2019. Standardised soil profile data to support global mapping and modelling (WoSIS snapshot - 2019). Earth System Science Data (esss-2019-164).

The following set of soil properties are provided with the ‘September 2019’ snapshot:

The underpinning WoSIS data model and elaborate standardisation procedure are described in a Procedures Manual. Particular attention has been paid to the licence specified by the various data providers. In case of so-called ’limiting licences’, the corresponding data are not served to the international community. However, upon their standardisation, some of these may be used for developing SoilGrids when specifically indicated by the data providers.

ISRIC WDC-Soils, a regular member of the ICS-World Data System, aims to serve the international community with a growing selection of standardised soil data through the ISRIC Soil Data Hub. The development of this service has been made possible thanks to the contributions of a steadily growing number of data providers and experts.

There are still many geographical gaps in ’WoSIS-latest’. Similarly, gaps remain in the feature space; typically, there are fewer observations for the subsoil than for the topsoil. We herewith kindly ask potential data providers to contribute point data to the global WoSIS effort; please contact us and we will be happy to assist.