The 'Realising Sustainable Agricultural Livelihood Security in Ethiopia' (REALISE) programme was established in 2018 with the aim to contribute to sustainable livelihoods through the introduction of improved farming practices, innovations and social experiments to strengthen the current Productive Safety Net Programme (PSNP). The programme focuses on four regional states, covering 60 woredas, and has an initial implementing period of three years (2018-2020).

The programme is funded by the Directorate-General for International Cooperation (DGIS) of the Netherlands Ministry of Foreign Affairs and implemented with support from Wageningen University and Research (WUR) in the context of the bilateral BENEFIT partnership between the governments of Ethiopia and the Netherlands.

ISRIC - World Soil Information's role as partner in the REALISE programme is to provide support and guidance to a soil survey and mapping initiative and capacity building activities, this as a follow up to its contributions to the CASCAPE project.

ISRIC was guiding the soil survey campaign in 18 woredas at a targeted scale of 1: 50,000 and conducted by six survey teams. For this purpose, a geomorphic base map was prepared at 50 m resolution for the entire country (see Figure) to guide the localization of survey observations covering the diversity in landscape positions. Observations were made by soil augers and soil pits and recorded using a field form template. The soils were classified as Reference Soil Groups (RSGs), with preferably 1-3 principal qualifiers (PQs) and a number of supplementary qualifiers, (SQs) according to the World Reference Base for soil resources (WRB, version 2014). Samples were collected from representative soil profiles and the soil analytical data are used to establish the final soil classifications as well as to characterize them. The soil profiles data were compiled and quality controlled and the geographic distribution of the soil classes distinguished in the field was modelled, validated and mapped at targeted scale using Digital Soil Mapping (DSM) techniques. In this, an innovative approach was developed to maintain accuracy at increasing levels of detail (number of qualifiers) which implied that the recorded classes were disaggregated into WRB 'building blocks' which we subsequently mapped and used as input to the WRB key to reconstruct the most probable soil class at targeted level of detail. The final map selected to share for scaling purposes depicts RSG's at an accuracy of 0.57 and with 1 PQ and 3 SQs at an accuracy of 0.47. The results are publicly available and can be freely used with proper attribution (with CC BY license).

Soil classification is key and critical in the approach and requires survey teams with pedological expertise. Also key is the adherence by all teams to agreed upon standards and approaches in data collection, processing and sharing. Hence, an introductory training has been provided by ISRIC staff, followed by infield backstopping of the survey activities with particular attention to surveying according to the base map and application of the WRB standards. Moreover, a training Digital Soil class Mapping was provided to the Soil Resource Information and Mapping Directorate of the MoA as a capacity building activity which was completed by sharing of a stack of country-wide covariates at 50 m resolution.

The project generated the following:

Directorate-General for International Cooperation (DGIS) of the Netherlands Ministry of Foreign Affairs. 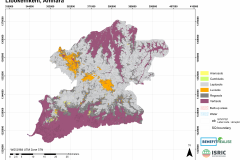 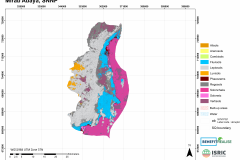