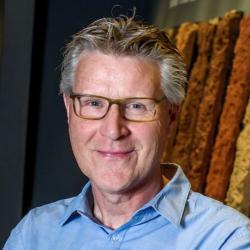 Gerard holds an MSc in Applied Mathematics (1987) and a PhD in Environmental Sciences (1993). His PhD research on error propagation in spatial modelling with GIS marks the start of a scientific career in spatial uncertainty analysis, with applications in the soil domain as a main focus. Gerard has also contributed substantially to the development of pedometrics, which is a field of soil science that uses mathematical and statistical methods for the study of the distribution and genesis of soils. He chaired the Pedometrics Commission of the International Union of Soil Sciences from 2003 to 2006 and was president of the Netherlands Soil Science Society from 2004 to 2007. He received the Richard Webster medal for the best body of work that advanced pedometrics in 2014 and chaired the Organising Committee of the 25-th anniversary Pedometrics Conference in Wageningen in 2017. He is Deputy Editor of the European Journal of Soil Science and editorial board member of Geoderma, Spatial Statistics, Journal of Integrative Agriculture and two more ISI journals. Gerard also holds a position with the Soil Geography and Landscape group of Wageningen University since 2003 and was appointed special professor in Pedometrics and Digital Soil Mapping at Wageningen University in 2017. He is a visiting professor of the Chinese Academy of Sciences since 2011. He was recognised by the Web of Science Group as a Highly Cited Researcher in 2019 and received the Peter Burrough medal of the International Spatial Accuracy Research Organisation in 2020.