Site-specific fertilizer recommendations for major food crops in West Africa have been modelled and mapped by ISRIC in collaboration with the International Fertilizer Development Centre (IFDC) and experts from the NARs of Benin, Burkina Faso and Ghana. The project was carried out within the context of the West Africa Fertilizer Programme (USAID WAFP) which IFDC has implemented over the last five years in collaboration with the Economic Community of West African States (ECOWAS).

The work provided a proof of concept for progressive updating and upscaling of fertilizer recommendations across the region. The concept and preliminary results were presented to some 160 participants of the regional forum ‘From soil analysis to delivering more profitable fertilizers to farmers’ in Lomé, Togo (11-13 April 2017). The forum was organised by the West Africa Fertilizer Program (WAFP), the Four-Country Cotton Partnership (C4CP) and the Feed the Future Ghana Agricultural Technology Transfer Project, all implemented by IFDC, in collaboration with ECOWAS, to agree on pathways to delivering fertilizer recommendations that will result in sustaining greater returns on fertilizer investments, and yields, particularly for smallholder farmers. The proof of concept was well received by the various stakeholders and provides a pathway together with an operational framework for concrete collaborative follow up.

In June 2017, the approach and preliminary results were discussed and validated by regional experts. Target yield levels and several parameters were fine-tuned to better meet regional conditions after which the approach was repeated and the final, validated, results produced. 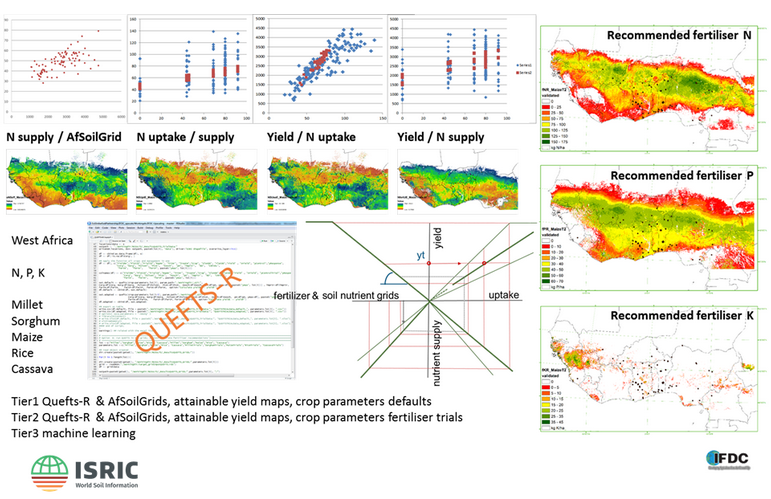 The approach makes use of the soil nutriënt maps of Sub-Saharan Africa (Africa SoilGrids) as a spatial basis for extrapolation. These maps represent estimates of soil nutriënt contents (macro, meso and most micro nutrients) at a resolution of 250 m; they were created using soil analytical data from over 60,000 sample locations and machine learning. A tiered-based approach was applied. In the first Tier, QUEFTS was used to model crop responses to nutrients (NPK), as measured at fertilizer trial locations, and to subsequently map site-specific fertilizer recommendations that meet the nutrient requirements at target yield levels as derived from maps of attainable yield (FAO) for millet, sorghum, maize, cassava and rice. Also modelled and mapped were the corresponding fertilizer use efficiencies composed of the soil- and fertilizer nutrient release efficiencies and the crop nutrient uptake- and use efficiencies.

The resulting maps were added to other spatial covariates to model and then extrapolate fertilizer recommendations, reported from fertilizer trial locations, in a second Tier using machine learning. The nature of the reported recommendations though proved insufficient to support effective machine learning, which would require a larger data set of more homogeneous nature, and therefore the results of the second Tier are considered inadequate. Hence, the maps resulting from the first Tier approach are presented here as the final, proof of concept, product. The approach, and resulting maps, can be readily updated upon the availability of adequate soil-crop-response data for the regions and crops under consideration. 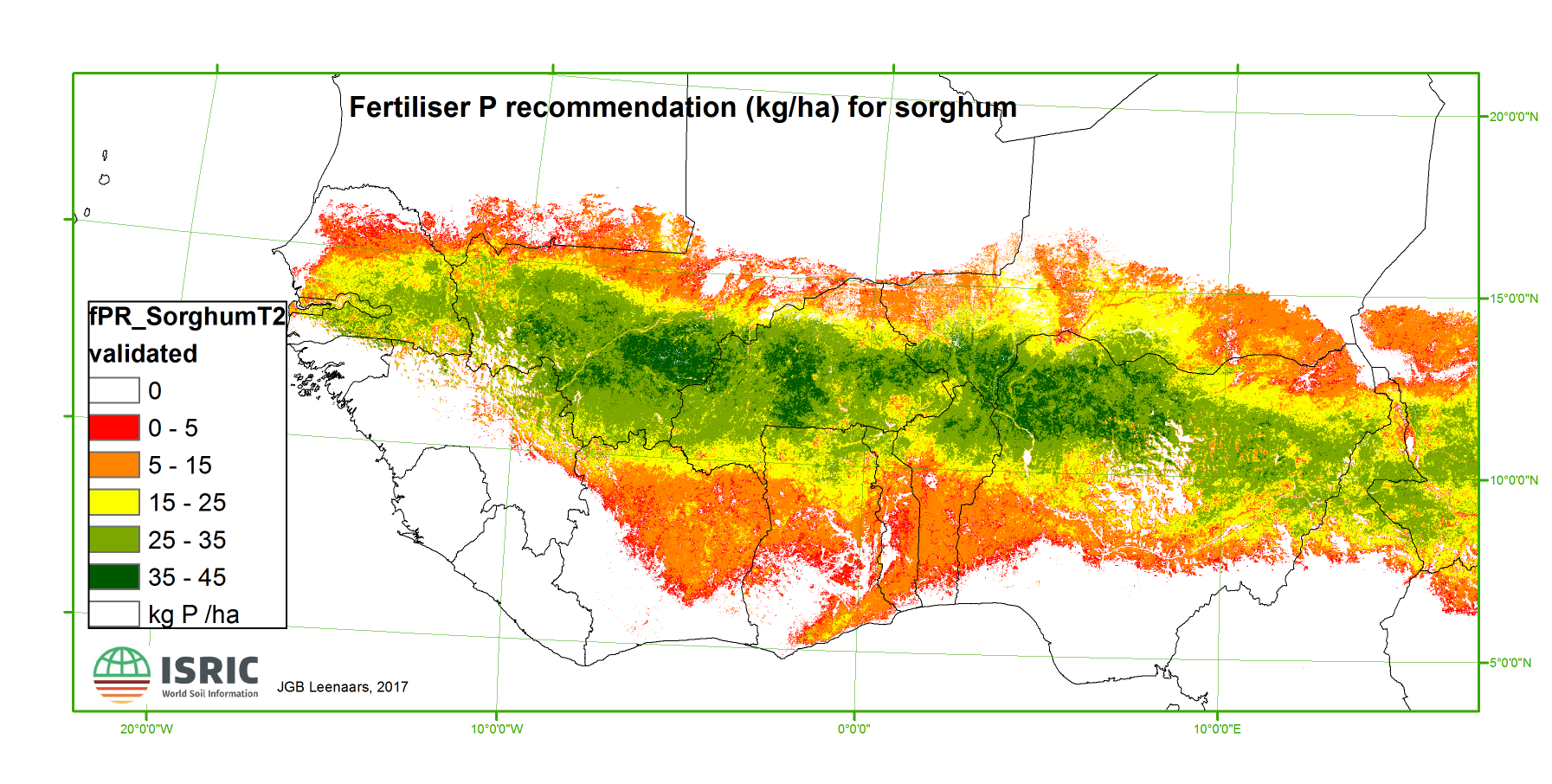 The gridded maps of site-specific fertilizer recommendations were aggregated according to the agro-ecological zones (AEZ) of Benin, Burkina Faso and Ghana and presented as generalised polygon maps. The uncertainties within each zone are quantified through cumulative probability distributions (0-100%).

The full project results as well as the input data, licensed according to CC-BY 4.0, are freely available for use according to the ISRIC data policy at the ISRIC ftp server (ftp://ftp.isric.org; password protected). The summary results per AEZ are visualized on separate webpages for each crop: millet, sorghum, maize, cassava and rice.

The full project report (draft) can be downloaded here below. Note that this report is a draft and has not been internally reviewed. Therefore it doesn't have the status of a formal ISRIC report.