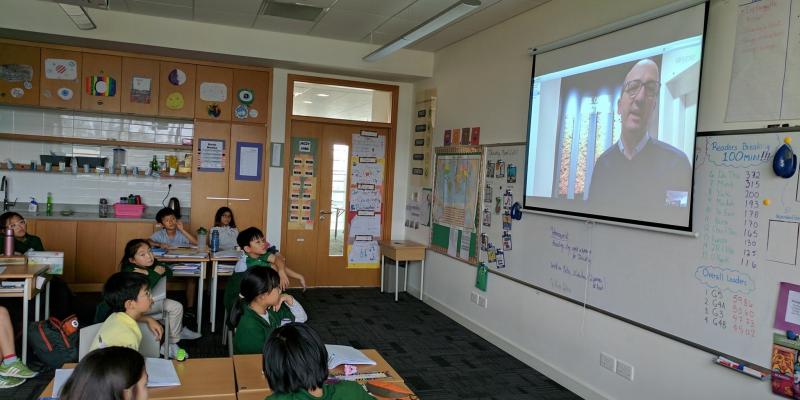 Through a live streaming video connection, Class 4B and 4A of Concordia International School in Hanoi, Vietnam have explored the soils of the world in the ISRIC world soil museum. The students, on average 10 years old, are studying soils in a science module that delves into topics such as landscape, soil formation and how soils are managed. The class was introduced to the soils in the museum that is located 8862 km in a straight line from their school, by Stephan Mantel, Head of the World Soil Museum. Together, they looked at the marvellous variation in colours, layering and other features of soils around the world. After the tour, students came forward to the camera and were given the possibility to pose questions about soils. Mr Mantel was pleasantly surprised by the many relevant questions brought forward by individual students, such as: “what layers are generally found in the soil”?, “Is it harmful to put garbage in or on top of the soil”? and “How do you collect and preserve the soils that we see on the walls”?

In response to the questions from the class as to how and why Mr Mantel had become a soil scientist, the answer was that a curiosity for nature and landscapes explored during holidays and development of a stone collection, when he was their age, developed into a passion for geology and soils that later became the topic of study and work. Exactly that was noted with the pupils of Concordia International School: a learning attitude marked by curiosity and passion.