The amazing diversity of soils

The intensity and nature of soil forming processes is influenced by (environmental) factors: climate, relief, parent material, organisms (including man) and time.

Climate is an important factor in soil formation; soils differ widely from one major climatic zone to another. Tropical climates for example, with their high temperature and rainfall, yield deep, strongly weathered and leached soils with low nutrient contents. The lush vegetation is almost the only source for replenishing nutrients. Arid climates with low precipitation and high evaporation give rise to soils that contain variable amounts of easily soluble components such as calcium carbonate or gypsum that is left behind after evaporation of water from the soil. In temperate climates, soil formation – to a large extent a chemical process – is more or less restricted to the warmer part of the year, resulting in less weathered and less deep soils as compared to tropical regions. In arctic climates soil formation is even more restricted. Moreover, it is strongly influenced by freezing-thawing processes and the presence of a permanently frozen subsoil (‘permafrost’).

Past climates may also be reflected in current properties and distribution of landscapes and soils, especially in the subarctic and northern temperate regions. Here, large glaciers during the Ice Ages have removed all soil material and new soils were formed after the retreat of the ice. Consequently, soils of these regions are relatively young and ‘immature’.

The importance of climate for soil formation was recognized by early soil scientists, especially in Russia, where the concept of ‘zonality’ was developed. This concept distinguished ‘zonal’ soils (soils corresponding to the major climatic belts of the Earth), ‘azonal’ soils (soils not yet in equilibrium with the present-day climatical conditions) and ‘intrazonal’ soils (soils that are strongly subject to local conditions other than climate). Soils developed in volcanic material are azonal soils found in all climates and at all altitudes. 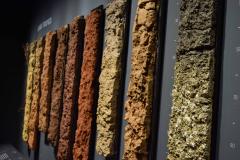