How do soils form?

The early phase of soil formation starts by disintegrating the rock under the influence of climate. Rainwater will dissolve rock elements, temperature fluctuations will cause cracks and fissures in the rocks. Freezing and thawing of water captured in the rock will widen existing cracks and cavities. Pioneer vegetation, at first lichens, will settle and their roots will further loosen the rock. Moreover, decaying plant debris will produce organic acids, which further disintegrates the rock. Organic matter will start to accumulate and be mixed with the mineral material provided by the rock.

Over time, rock minerals will be dissolved or transformed. Elements released from the rock will precipitate and new minerals may be formed. For example, iron will be oxidized and precipitate as iron oxides or hydroxides, giving the soil reddish or yellowish-brownish colours. Soil fauna will settle and mix (‘homogenize’) the soil. The soil will grow in depth through newly formed soil material at the bottom. The soil matures.

Given sufficient time under stable environmental conditions, soils will reach a steady state, whereby soil build-up matches their breakdown. Production of humus from decaying vegetation debris will equal its consumption by soil microbae, fauna and flora. Transformation of rock minerals into soil minerals will keep pace with the removal of earlier formed soil minerals. Slow surface wash of topsoil is matched by new formation of soil material from the bedrock. The soil has aged.

Dramatic events can interrupt the life cycle of soils. A soil may be covered suddenly by a volcanic eruption or by submergence under water. They may disappear in part or altogether by water or wind erosion. On steep slopes the newly formed loose soil material will be removed fairly easily by runoff of rainwater or gravitational forces. Therefore, soils in mountainous regions are often shallow. On footslopes and in more level areas soil material will accumulate and this leads to deeper soils.

Soils are considered a finite resource as their formation and development requires hundreds to thousands of year, as their loss and degradation is not recoverable within a human lifespan.
The environmental conditions that influence soil the physical, chemical and biological processes that are involved in soil formation are commonly known as the five soil forming factors: Climate, Organisms (flora and fauna, including human activity), relief or terrain, parent material and time. 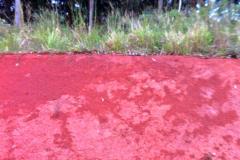